Rich in Tradition, Endless in Surprises, Incapable of Being Mastered, Once Played, Never Loses Its Attraction

We are closed for the season. Thank you for a great 2022.

We can’t wait to see you next year!

Plan an EventBook A Tee Time
3

We are always welcoming new members who share our enthusiasm and passion for the game of golf.  Consider becoming a member of Kebo Valley Golf Club.  Become a member at the oldest course in Maine, which currently rates #3 best course you can play by Golf Week.

Even the finest players periodically have a professional look at their swing. Kebo Valley is the perfect place to tune up your game. Our instructors can often help you squeeze another 5 or 10 yards out of that old driver.

Rich in Tradition and Majesty

The 8th Oldest Club in the Country

Established in 1888, Kebo Valley Golf Club is the oldest golf club in Maine, and the eighth oldest golf club in the United States. Kebo has tested the skills of many of the country’s finest players, most influential politicians, and leaders of industry. Kebo includes 18 spectacular and well-maintained golf holes, each hole will challenge and excited players of any level.

President Howard Taft, U.S. Open Champion Scott Simpson, and PGA legend Billy Casper have hit drives and sank putts on Kebo Valley’s hallowed grounds. In 1911, President Taft cards a 27 on what was then the “Elbow” hole, which is today’s 17th. This hole is commonly referred to as the “Taft” hole. You will play the same holes that one of the greatest golfers of all time played, the one and only Sir Walter Hagen. It was in 1922 that Sir Walter played two rounds at Kebo Valley. With Cadillac Mountain sitting majestically in the background, Mr. Hagen first shoots an even-par 70 and then cards a course record 67, which stood for 50 years. After Playing Kebo’s signature 8th hole Mr. Hagen stated, “The 8th hole is one of the toughest four pars I have ever played”.

“I have rated over 100 different golf courses throughout the United States and Canada, and I have never played a course with any better greens than I played today at Kebo!”

At Kebo we want to be your top priority for your day.  Take a lesson from our PGA Pro, Play a round of golf and finish off at the Link’s Pub.  Make Kebo Valley your family’s daily spot. 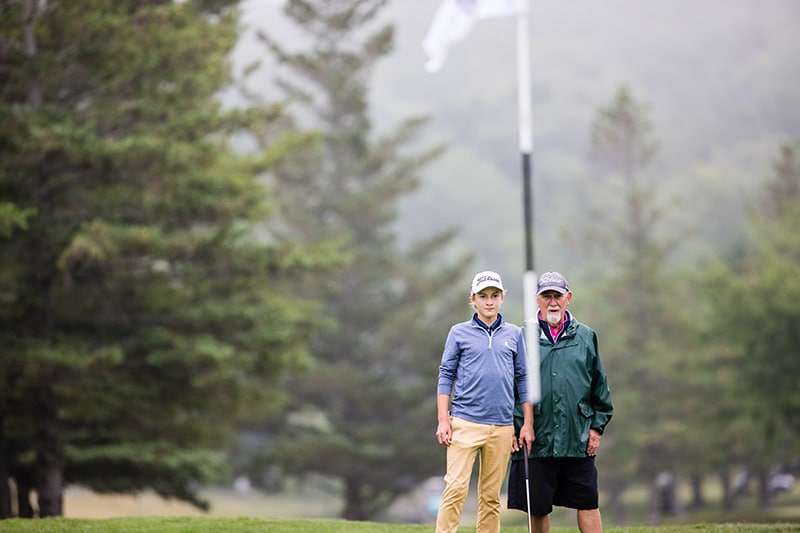 The Links Pub is closed for the season.

Thank you all for a memorable year!

A round of golf at Kebo Valley is a great way to enjoy the company of the folks you work with, without the pressure of the office environment. It’s a terrific opportunity to relax and get the creative juices flowing. Add a customized meal or a gift bag with monogrammed golf balls, a shirt, or a hat, and your clients or employees will end the day smiling and rejuvenated.

People are talking about Kebo Valley.

Rating
4.5
Based on 62 Reviews
Write a Review

We played as a walk in couple. The guy in the shop was very helpful get us started. The course wasn't busy on a weekday afternoon so we felt like we had the place to ourselves. The course flowed with a nice mix of hole dynamics. The water in the streams & ponds was crystal clear. We saw a deer which was a bit of a treat for us. The deck looked inviting as a 19th but we unfortunately needed to hit the road. Folks, play here, pay the money & enjoy the fresh air & serenity. Rating 9/10

This is a nice old course, easy to walk and picturesque. The staff was very friendly and pace of play was good for an 1130 tee time. Nice product in the pro shop.

Was in Bar Harbor for the week & decided to play a round while wife was at the spa. The course was convenient to Bar Harbor. The course has some neat history and great views. The layout was decent. The greens were well maintained and quite fast, you definitely want to be below the hole. Greens fees were quite pricey - for the price I expect a lot more. I've played courses of similar quality for a fraction of the price. I've also played other courses for this price that had a much better track to play. All in all, it was a nice round, but I don't know that I would play it again, unless greens fees decreased.

I was a little concerned about Kebo Valley based on some online reviews thinking it would be snooty, unfriendly country club atmosphere. It was nothing like that. Every member of the staff we interacted with was friendly, helpful and did everything they could to make our experience a positive one, the course was fun and challenging and our overall experience was terrific. I'd recommend this course to serious golfers and casual players alike. Plus it is 5 minutes from Bar Harbor and very convenient to visit.

This a really nice course with a very attentive staff but the true selling point is the surrounding beauty. The course is a bit pricey but they certainly do their best to get it in great condition with the short season they have. The greens were absolutely perfect. The course is user friendly for all levels, I played as a single and the locals all let me play through and finished in 3 hours. If you can get over the gravel cart paths and gas golf carts, you will be glad you played here.

We traveled to Bar Harbor recently for the destination wedding of my nephew. Many who were attending planned to arrive prior to the weekend, and so we planned for a day of "golf with the groom", on Friday before the big event. I was in touch numerous times over the past months with Peter, the club pro to set up our day. Peter was very accommodating, allowing advance reservation of tee times, and the fine tuning of our numbers two weeks prior. Our four groups teed off on Friday morning and were done in plenty of time for those in the wedding party to make the rehearsal. I think our round was just about 4 1/2 hours. The course, especially the greens was in very good shape, especially considering the drought conditions in New England this summer. Had a great day at the 8th oldest course in the US.

Played here in a 2 day tournament. Even though I struggled with my game I really love this course. I am a big fan of old style designs and this does not disappoint. It is not impossibly hard or overly long... and there are some holes you can score on. But you better have your short game in top shape! If the greens are fast (and they were for this tournament) you will have trouble stopping the ball if it is above the hole. I really struggled on the greens but plenty of people scored well in the tournament so I just need to practice more. Overall greens and tees are immaculate and rest of course in very good condition considering the dry weather we had. We played the ball down and didn't have a bad lie all day. Overall a fine course and well worth it if you like old style designs.